How Many Asses In Seats?

Much of the creative entertainments we enjoy are done according to formula, agreed?  Why is such practiced, especially in movies?  Because there are certain movie formulas that are guaranteed to work no matter if the movie is made in 1959 or 1977 or in 2011.  Criticizing a Western for having gunfights at high noon, horses and buffalos is kinda silly because when you watch a Western you have certain expectations of what you’re going to see.  After all, isn’t that why you’re watching a Western?  Because you know the formula, you just want to see them played out in a different mix, is all.

Now, as my dear Aunt Lottie would put it; I say that to say this: I’ve read reviews criticizing BATTLE: LOS ANGELES for being a cliché war movie.  Not that the reviews are wrong.  In fact, it is a cliché war movie.  This is exactly the same kind of movie John Wayne and Audie Murphy were making back in the 40’s and 50’s except the enemies were German and Japanese soldiers, not aliens.  In fact, this could have been a war movie set in Afghanistan or Iraq as that’s how it’s played out: as a modern day war movie.  The only exceptional thing about the enemy is that they come from Outer Space and not Over There. 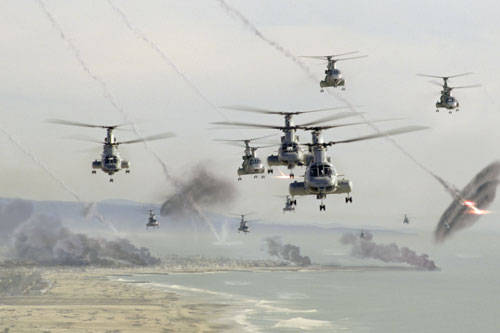 Marine Staff Sergeant Nanze (Aaron Eckhart) is forced to put off his retirement as he has to replace a platoon sergeant for an important mission.  The platoon he’s assigned to has to rescue civilians from an LAPD station within three hours.  That’s when the Air Force is going to carpet bomb the area.  The platoon commander, Lt. Martinez (Ramon Rodriguez) is kinda leery about Nanze.  The Staff Sergeant is a good Marine, no doubt about that.  But a lot of rumors about Nanze’s last mission have been floating around Camp Pendleton that he doesn’t like.  But orders are orders and so the platoon is off on their mission.  One that swiftly goes wrong as they are ambushed time and again by the relentless alien invaders.

All that you can get just from the TV commercials and the trailers.  BATTLE: LOS ANGELES isn’t trying to make you think it’s going to be one thing, then get you in the theater to find out it’s something else.  It’s about a platoon of Marines trying their best to survive against an enemy they never dreamed they’d be facing.  The movie is as brutally uncomplicated as a cast iron skillet upside the head.  Before the invasion, we get brief vignettes of the various platoon members and they each are a proven War Movie Type: The Green Lieutenant Who Has No Combat Experience.  The Virgin.  The Heroic Black Guy.  The Soldier With A Dark Past.  The Soldier Who Choked Under Fire And Fears He’s A Coward.  And as you watch each one of their vignettes, go ahead and play the game of Who Gets Killed And In Which Order.

So what’s right about the movie?  Aaron Eckhart, who I’m convinced is incapable of turning in a bad performance.  He plays his role as if he’s assuming you’ve never seen a War Movie before.  Michelle Rodriguez surprised me in this one.  Usually she plays one of two roles: The Pissed-Off Latina With Bigger Balls Than Any Man or The Really Pissed-Off Latina With Bigger Balls Than Any Man.  But in this movie she dials her usual anger way back and comes off more as a person and less like a stereotype.

I also liked how we never really get to know the aliens or why they’re here.  Oh, there’s some kind of technobabble about them needing our resources but it’s really not necessary.  They’re The Enemy and that’s all we need to know.  The aliens are tough mollyfoggers but they’re not indestructible.  They’re worthy adversaries for the platoon.

What didn’t I like?  That damn shaky-cam.  The use of it renders the firefights a jumble of meaningless images.  The use of shaky-cam in this movie is so bad that in the first two firefights I could swear that the entire platoon was wiped out and I was honestly surprised when everybody regrouped alive and well.  Once the action starts, the Marines are difficult to tell apart.

So should you see BATTLE: LOS ANGELES?  Definitely.  It’s the very essence of a summer popcorn movie.